Loyalty, trust, relevant and competitive are the foundations upon which Bega Cheese executive chairman Barry Irvin does business.

At a Farm Writers’ Association of NSW lunch in Sydney last week, Mr Irvin spoke about his, at times, different approach to business, including the fact “loyalty and trust were the foundations of Bega Cheese and what allowed us to go forward”.

From a single factory farmer co-operative to the largest listed dairy company on the ASX, which owns some of Australia’s most iconic food brands, Mr Irvin said as well as loyalty, trust and being relevant, doing deals with competitors is how Bega Cheese is where it is today.

And part of that was sharing “dreams and fears”.

“I had great dreams for Bega Cheese, which I would share with everybody,” Mr Irvin said.

“The interesting thing about that (sharingideas) is it included many of my competitors.”

Without doubt Bega Cheese has had a phenomenal growth story.

By Mr Irvin’s own admission, when he took over as chairman almost 20 years ago, “there were those in the industry that might have been predicting poor old Bega cheese on the lower south coast of NSW with 1 per cent of the milk and a naive young chairman were not long for this world”.

However, the Bega Cheese group of companies now has domestic and international sales exceeding $1 billion, produces about 210,000 tonnes of cheeses, milk powders, infant formula and nutritional products, and exports to over 40 countries around the world. The group now employs about 1700 people. Bega Cheese’s development strategy sees it firmly positioned in the top five dairy companies in Australia.

The turnaround for Bega Cheese started when they did a distribution deal with one of its biggest competitors, Fonterra, in the early 2000s.

“It involved us trusting somebody else with the stewardship of the brand in Australia and it involved us consolidating an element of the supply chain – being cheese cut packing and processing,” Mr Irvin said.

The next step was buying Victoria’s Tatura Milk in 2007 –  in the middle of a 10 year drought – to create “size and scale” in infant formula.

In 2009 it was a deal with another of their big competitors, Kraft, which allowed Bega to be the most “relevant and competitive” in the cut cheese area. They then restructured from a co-operative to being listed on the ASX in 2011.

“I still believe we can do really smart things if we think about how we can be relevant and competitive,” he said.

The next move came earlier this year when Bega announced the $460 million acquisition from Mondelez International, the manufacturer of Vegemite.

Mr Irvin said they had to add more capacity as a “branded player” in the market and Vegemite was the obvious choice.

“You’d probably say what is the top of the list brand in Australia that is unassailable and that people won’t buy generic and any other people who have tried to compete against them has failed,” he said.

The answer is Vegemite.

And that is where Mr Irvin’s foundations for business come in.

Mr Irvin said they already had a relationship with Mondolez, which he had been careful to maintain, resulting in trust and loyalty, humility and respect. This he said gave them the ability to do a deal quickly and privately.

Mr Irvin said “it isn’t rocket science but there is an underlying view of ethics, business practice, which does include loyalty, having a dream – or in more corporate terms having a vision”.

While it may not be rocket science, Mr Irvin’s approach to business and his success at Bega Cheese, are important lessons for agribusiness as consumers and customers are becoming more concerned with provenance and trust in the supply chain. 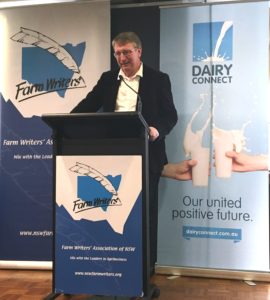