Farmers must be resilient to survive in the business.

In any given year they deal with fires, floods, storms, drought, rain at the wrong time, pests, disease and market fluctuations.

However, they also have to be innovative and not afraid to be different – two things Seftons is passionate about.

The need for innovation and striving to be different were highlighted during the Farm Writers’ Association of NSWs’ Christmas lunch at NSW Parliament House on Monday where the 2017 NSW Farmer of the Year was announced.

All three finalists were using technology, they were innovators in their field and they were doing something others aren’t.

The NSW Farmer of the Year (an initiative of NSW Farmers and the NSW Department of Primary Industries, with support from Fairfax Agricultural Media and SafeWork NSW) was Mike and Velia O’Hare, who operate “Greendale” at Beckom in Southern NSW producing canola, wheat and sheep.

What sets the O’Hares apart is that they introduced the nitrogen-fixing, hard-seeded pasture legume, biserrula, which Mr O’Hare said was right up there with some of the biggest innovations during his time in farming.

On winning the award, Mr O’Hare said his advice is to look at research, don’t be afraid to be different and keep innovating.

All sensible and effective advice.

The importance of innovation and research was also highlighted by the Hon Niall Blair MLC, NSW Minister for Primary Industries, Trade and Industry and Regional Water, at the lunch when he was discussing the success of the primary industries sector in NSW this year.

Reflecting on how the Department of Agriculture began in NSW, Mr Blair said since the 1890s the role of the department has been to solve the problems with research and pass on the answers to the farmers so they can do what they do best – grow and produce.

This year alone in NSW the first alkaloid poppies were successfully grown and harvested, medicinal cannabis is being trialled and the first Kingfish have been harvested.

Mr Blair said in 2015 the NSW DPI four-year strategic plan set a target to increase the Gross Value of Production of the NSW primary industries by 30 per cent by 2020.

And they achieved it this year – two years ahead of schedule – with the NSW primary industries sector now worth a record $15.44 billion, an increase of 32.4 per cent.

Results we here at Seftons think are impressive.

“We have done that off the back of being flexible, using innovation, new technologies and working with the sectors,” Mr Blair said.

While the industry has capitalised on favourable conditions and high commodity prices, it wouldn’t have been possible without research and innovation.

And it certainly wouldn’t have been possible without resilience. 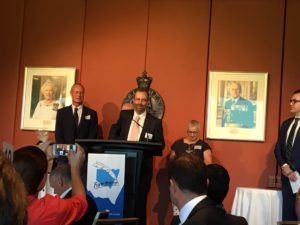