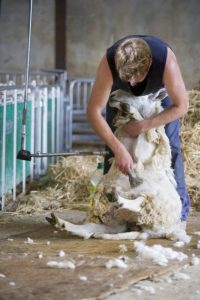 On the farm, we have just wrapped up a month of shearing. All went well, except that this year’s shearing went a week longer than usual with the same number of sheep.

Our excellent contractor was, as usual, efficient and brought a good team of shearing pros. But for three weeks, he was down two shearers.

There is a world shortage of shearers. This has hit especially hard in Australia, land of the Merino, as improved wool prices encourage farmers to make a greater investment in sheep.

This surge of interest in wool has run hard up against the long-term decline in our shearing workforce. We saw some good young shearers in our team, but the volume of new shearers coming into the profession has fallen well below requirements as woolgrowing comes back into favour – or producers move to two shearings a year, as we have done.

I was reflecting on this expensive education in farm labour shortages when the NFF’s 2018 Farm Workforce Survey dropped.

The report’s unsurprising message was expressed by NFF Workplace Relations & Legal Affairs Manager Ben Rogers: “Most farmers surveyed reported a significant shortfall of skilled, semi-skilled, and unskilled workers during both peak and non-peak seasons, and substantial financial and productivity losses as a result of these shortfalls”.

Finding good permanent labour is a challenge in itself, but more critically, farmers are struggling to find people in peak periods — that 20 per cent of the farming year when rewards are harvested for the patient work done in the other 80 per cent of the year.

Our permanent labour force — David, who has been with us for nearly 20 years, and Ben — are hardworking Aussies and indispensable to us. But a couple of times a year, for stretches of up to three months, we hit a work crunch, and we have found that the best solution available to us is to hire from the backpacker pool.

Currently the farm’s backpacker workforce includes Karin, an Estonian who in her other life is production manager for a high quality chocolate factory and who has trained showjumpers.

People like Karin add a richness to farm life; an element of diversity and education about the wider world that would be otherwise rare in rural Australia.

Farming in Australia is subject to some ungovernable risks — like climate and international markets — that can’t be controlled, only managed for.

Where should labour sit in agriculture’s risk spectrum?

I’d like to hope that enlightened policy around working visas, and some domestic cultural shifts that make farm work appealing to useful people who are otherwise underemployed, might one day ensure that farmers don’t rank labour as one of their top three challenges.

This article was published in The Land newspaper on Thursday 24 April, 2018. Link to the article can be found here:  https://www.theland.com.au/story/5361827/labour-challenges-faced-on-the-land/?cs=4763